Navy SEAL Jason Kealoha comes to Sunset Beach to release the ashes of his SEAL brother, who was killed in an attack in Nigeria. A Pacific Islander by lineage, Jason is unfamiliar with the Gulf Coast shores his buddy grew up playing in as a child. He befriends a beauty one night at sunset, as she roams the surf, skipping shells, lost in her own world.

Kiley Worthington is on the run from a sex trafficking cartel she stumbled upon as an investigative reporter in Portland. She decides hiding out in her sleepy beach hometown in Florida makes sense until she can figure out where she can spend the rest of her life in safety. The one-night stand was nice, but the last thing she needs is a huge tatted overly-protective guy who won’t leave her alone. His attitude is all hardboiled, but his lips are warm and seductive. If she’s not careful, she may never escape.

But Jason turns out to be the right kind of wrong for Kiley, as her enemies find her. In Jason’s arms she finds a true sanctuary, as well as a safe place to hide forever amongst the white sand beaches and golden sunsets of the Florida coastline.

He shielded her from the wind coming from the South, brushed her hair from her face and placed a soft kiss to her forehead. “Don’t be afraid. I’m not going to hurt you. I only want to help. Please, don’t be afraid. I’m here now. Nothing is going to harm you.”
Her arm wrapped around his waist, not reaching very far, as she snuggled in the safe space he’d created for her. Jason felt a twinge of regret that he’d been so harsh with her. Her head rested on his chest just below his chin. He ran his fingers through her hair, sifting, whispering things he’d heard as a child when he’d jump into bed at night with his mother when he had nightmares.
Whatever horror movie that had been playing in her head must have been something frightening. He knew what fear smelled like. He’d seen women panic and faint in the path of danger, unable to defend themselves or their loved ones. He’d seen it all too often, and all too often he’d not been able to save them either.
She leaned back, trying to see his face. “What language is that?”
Language?
He must have been chanting, or speaking the circular rhymes they’d sing as kids. It had come second nature and he couldn’t even remember what he’d said.
“Hawaiian. Something my grandmother taught me.”
His right palm brushed tentatively against the side of her face, and then he released her all at once, and stepped back. His arms fell to his sides.
“I’m sorry. It was a panic attack,” she mumbled.
“No, not exactly. The attack was when you passed out. You are scared of something
little one. That was pure, cold fear.” He sighed again, wanting to hold her once more, but resisted.
She wrapped the blanket around her.
“Are you in danger?” he asked, suddenly wishing he’d not been so forward.
“A little. But I’m far enough away from all that. Thank you, and I apologize how ridiculous I was.”
“No apology necessary. Fear does strange things to people sometimes. But you were brave. You fought well.”
“No I didn’t. I was pathetic.”
“You were difficult to stop. That speaks to your courage, not your skill.”
“Did I hurt you?”
Jason let her fingers reach for his cheek which had now turned warm and was probably swollen. She’d packed a good swing and the sting surprised him. He did not back away, allowing the touch. His heart was pounding, beating like the drums of his ancestors as she gracefully twisted her wrist and laced the backsides of her fingers across the side of his face all the way to his ear.
He could have easily taken her in his arms and he knew perhaps she’d let him kiss her, but he stood like a statue, feet planted in the sand, like the surfboards standing guard at Hanalei Bay. The wash of waves lapping on the shore stilled his restless and troubled soul, while the distance between their bodies remained. She had the touch of his grandmother and some of the older women of his community–the way she used to bless his cuts and bruises, especially the ones left by the two Samoan sisters.
This stranger was a healer, and yet Jason knew she didn’t understand yet what her true capacity was.
As he drove to his motel room, he knew that, if the Gods of his ancestors wanted him to meet her again, they’d create the opportunity. The empty tin sat next to him on the front seat of his rental Jeep, as if Thomas was witness to this magical connection he felt to her. Maybe Thomas was laughing at him.
He glanced down at the urn.
“We won’t speak of it.”
The urn obeyed.
But all the way back he couldn’t get the feel of her shaking body against him, the scent of her hair, the tiny beads of sweat at the sides of her cool forehead, and her probing but gentle fingers.
He thought about her while he showered, and then watched moonlight glisten on the water of the Gulf. He thought about her as he lay naked in his bed, his head propped against his forearm.
Jason had left the sliding glass door open a few inches so he could inhale the ocean air all night long, which was always his custom wherever in the world he traveled, if it was safe. He dreamt of the beaches back home, lush and full with the scent of flowers floating all around him. He thought about the tanned Polynesian girls he’d dated and made love to on the beach, their modest nakedness a thing of beauty and grace. He felt their full lips, and the smooth flat of their noses as they cuddled, giggled and whispered things to him. In those days, drunk on the discovery of sex, he didn’t realize how the ocean, the beach and a woman’s body could heal all those broken parts he could not.
He thought about the girls he met in Coronado who were a bit too fast for his tastes, and wanted everything now, hard and deep, leaving him aching for a simple touch of kindness or a word of wonder.
Like a metronome, the constant rhythm of the ocean sang him to sleep in stanzas stitched together by the calling of sea birds.
The last thought he had before he drifted off was that Thomas had brought him here to Sunset Beach. It was a bigger purpose than the final good-byes to his friend. Thomas wanted him to see the place where he’d grown up, to see the beauty and treasure buried here. In time, he’d find out just what that treasure was.
As One door closed, another one was waiting to be discovered. Whatever was on the other side of that door, was his destiny.
Tomorrow would be a new adventure. 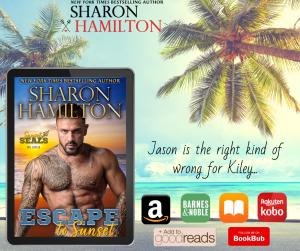 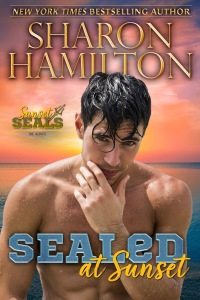 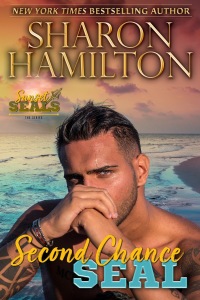 Her SEALs and former SEALs have invested in two wineries and a brewery in Sonoma County, which have become part of the new stories. But old characters keep returning to all the newer books.

A lifelong organic vegetable and flower gardener, Sharon and her husband live in the Wine Country of Northern California, where most of her stories take place. 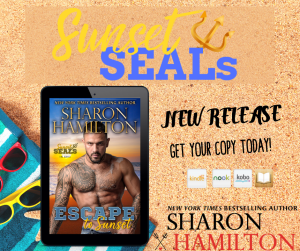