Unemployed actress, Hannah Brooks, is applying for a waitressing job when her luck changes. Mistaken for a chef, she’s offered a position at twice the pay, but there’s a slight problem. She can’t cook, but she can act.

Tom Hadleigh is determined to make a success of the restaurant he inherited from his father, despite attempted sabotages against it and his reputation. Tom’s a hothead and not looking for love but when Hannah walks into his restaurant, he can’t help but turn his head. With so many problems in his life, is she the answer?
When their worlds collide, will their passion ignite, or will the heat force them out of the kitchen?

FAKING IT IN THE KITCHEN is a standalone, romantic comedy, suitable for readers aged 18 or over, due to mature content and sexual themes. 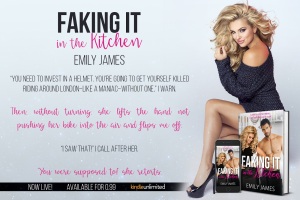 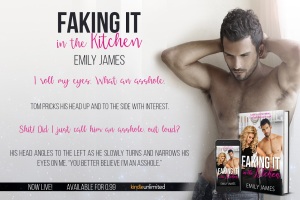 Emily James is a British author who lives on the south coast of England. She loves to travel and enjoys nothing more than a great romance story. On the rare occasions that she hasn’t got her nose in a book, Emily likes to spend time with her beautiful family and friends.